Popular Examples of Music Written in 3/4 Time: A Historical Look at the Use of the 3/4 Time Signature in Popular Songs 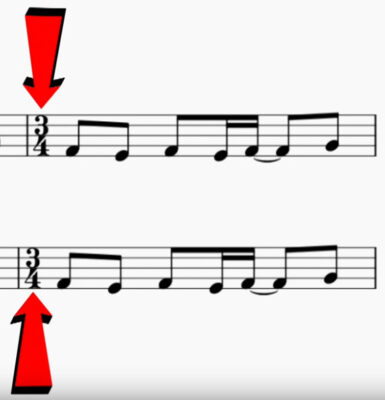 While we have previously covered different time signatures in other tutorials, today we’d like to explore a time signature often forgotten about when thinking of modern popular music. While everyone has surely heard or even danced to the 3/4 time signature, it’s not one of the more common ones you’ll hear in today’s popular music.

That time signature is ¾ time.

And, though it is not as commonly seen in popular music as its next door neighbor, 4/4, the 3/4 meter certainly has played an important rhythmic role in many popular songs and musical genres, whether you realize it or not. In fact, 3/4 time played a major role in popular music in the mid 20th century, even as its use has slowed in the first 20 decades of the new century.

But, before we get into a list of top 3/4 time signature songs from popular music, let’s make sure we all understand this under-appreciated meter. And, if you’re already knowledgeable about various time signatures, check out the drum loops we have available and get inspired to write new music today.

An Introduction to ¾ Time

If you’ve ever danced to a waltz, then you already know the time signature 3/4. The earliest references to the waltz go back about 500 years. Couples were described as dancing with rhythmic turns in “triple time” across the dance floor.  This triple meter dance has obviously endured in the ballroom, but it eventually found its way into popular music. And, sometimes, in some of the most diverse musical contexts, including country, pop, dance, and even metal.

Before we look at 3/4, let’s look at 4/4, a time signature every knows and is comfortable with.

Obviously, 4/4 time is the most common time signature of western music. Almost all modern music, whether it’s hip hop, house, pop, country, rock, funk, techno, drum-and-bass, or metal is in 4/4 time. It’s so common that it is even called “common time”! In Common time, a quarter note equals one beat. Each measure contains four quarter-notes, so you have four “beats.”

Understandably, nobody today needs to count to four to understand the pulse of the 4/4 rhythm. This rhythm can be heard, or perhaps more important, “felt” in almost all the music we hear around us. So, let’s leave “common time” behind and move onto an explanation of a little less of a “common time” and explore ¾ time.

To begin understanding ¾ time, let’s get back to the waltz. Here’s a refresher:

One thing you will notice, however, with all time signatures, including ¾, is how tempo can vastly change the “feel” of the rhythm. To be clear, the speed of a musical piece (the tempo) is wholly independent of the time signature. But, changing the tempo can have huge implications of how a time signature is felt.

As you go through the list of ¾ songs below, notice how tempo dictates how we perceive the music. Simply speeding a song up or down can have dramatic effects and will likely dictate what type of musical genre a work will fall under. Faster tempos create more energy while taking the tempo down will create more space and even mood.

As you listen to our top picks for music in ¾, try tapping out the ¾ rhythm. Just remember the count of “One, two, three. One, two, three” even as many of these tunes won’t feel waltzy at all.

But, with all time signatures, once you get beyond counting, it’s critical that you feel the time signature as well. Much of what gives ¾ it’s “different” feel lies in the fact that it uses an odd number of beats, no matter how they are accented or how the tempo may vary.

Although not as common today, the ¾ time signature was a staple of many pop hits in the fifties and sixties. The pop charts are full of ¾, waltz-inspired hits, often without drums or even full-band accompaniment.

So, dig into our list of top ¾ songs and feel the rhythm. We’re going to go in historical order to track its evolution.

Look up and down the charts from the 1950s and you will see countless tunes employing 3/4. Particularly if you look at the early 50s. Here are three picks, though we could have selected a number of other songs. What you will clearly notice in these examples, though, is how they all maintain that traditional 3/4 waltz feel. It would be several years later until the 3/4 meter began to take on more varied feels.

The 60s continued using 3/4 time in many popular songs. And, while the decade started pretty traditionally with the 3/4 feel found on Elvis’ cover of “Are You Lonesome Tonight?,” check out where the decade ends: with Hendrix’s mind-bending and relentless use of 3/4 meter in “Manic Depression.” In the span of seven years, you can see how much changed so quickly.

And, beyond using quarter-notes as the rhythmic base, there are many other meters out there like 5/8, 7/8, 9/8. In these time signatures, eighth notes are considered the basic structure of the measure.

And, if you followed our list of top 3/4 time signature songs, you’ll notice that often time signatures can change within a piece. While the music may not be built entirely around the 3/4 meter, many songs do, in fact, us it to help distinguish melodic changes or structural movement within a composition.